The future is here: A bathroom that literally cleans itself

You no longer have to suffer the plight of grimy, toilets mid-flight with Self-Cleaning Airplane Bathrooms

I love to travel, and unlike many people I actually really rather enjoy a long-haul flight! Why? I’m not so sure, but despite my love for flying there is one thing that I can’t seem to get my head around and that is the airplane bathrooms.

Anyone who has been on a plane for longer than 2-3 hours can surely agree that the airplane bathroom (if you can call it that) is arguably one of the least favourable places to visit during your flight. Not only is it a ball ache squeezing past all of the sleeping strangers that are obstructing your path; but then you have to wedge yourself into a tiny closet that has been used by dozens of smelly, sweaty people. Many of whom may likely still have Deli belly from their travels. Nice!

Then again, you can’t really complain too much because when you really think about it; the fact that you are even able to go for a poo at 39,000 feet in the air, in the first place, is a miracle in itself! But even so, they are cramped and they are whiffy, which is why the prospect of a self-cleaning bathroom is amazing to me.

Airplane bathrooms aren’t cleaned until the plane eventually lands on solid ground, so if there is any mess left behind by other passengers during the flight, you’ll have to suffer through it. (As many of you likely already have had to do) Thankfully, Boeing, the Airplane manufacturer have developed a way to clean their bathrooms without having to physically clean their bathrooms! That’s right, Boeing have officially introduced a self-cleaning airplane bathroom.

The bathroom will automatically clean itself after each visitor, using a far UV light that successfully kills 99.99% of the germs. (They can never seem to catch the 0.001% can they? What on earth are those pesky germs made out of?!!) 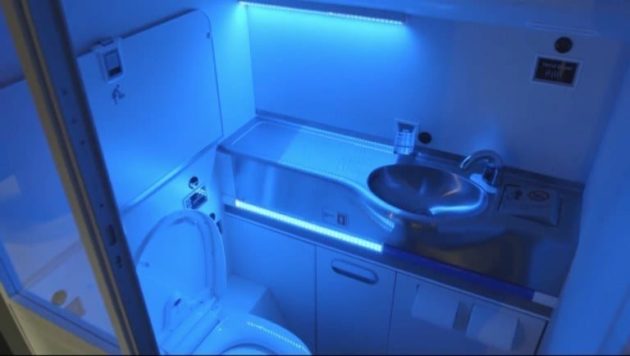 How does it work?

The UV light literally causes the microbes to explode and even clears the odour in the air. And what is even more fascinating is the fact that the entire process takes only 3 seconds!

Not only that but you’ll be able to keep your hands entirely germ free as well, given that all of the features in these new bathrooms are hands-free sensory. So simply by waving your hand over the toilet seat it will raise, while the tap, soap dispenser, bin and hand-dryer all respond in the same fashion.

Great news for all of those germaphobe’s! No longer will you have to suffer with the discomfort of holding in your number one’s and two’s whilst flying. Finally, you’ll be able to comfortably use these new airplane bathrooms without fear of falling ill from all of the foreign germs that surely linger in regular airplane bathrooms.